Born at Carlsruhe in 1763, Melling studied under his uncle Joseph, a painter at Strasbourg Academy and later joined his brother, an engineer in Klagenfurt, Carinthia where he studied Mathematics and Architecture. At the age of nineteen he joined the Russian Ambassador’s household and travelled to Italy, Egypt and Smyrna, until finally settling in Constantinople. From his base in the city he journeyed to the islands of the archipelago into Asia Minor and the Crimea.

Melling’s work on the restoration of the Dutch residence Nestabad brought him to the attention of Sultana Hadidge, sister to Selim III and in 1795 he was appointed Imperial Architect, a post he held for 18 years. Melling designed the Sultana’s neoclassical palace at Defterdarburnu Ortakoy and set about improving the buildings along the Bosphorus, in addition to designing gardens, interiors, clothing and jewelry. His close relationship to the Ottoman Court gave him privileged access not normally afforded to commoners let alone Europeans thus allowing him the opportunity to record an intimate picture of the Ottoman city and its society.

In 1803 Melling returned to Paris and began sourcing subscribers for what would become the monumental Voyage pittoresque. After six years he had enough funds to establish an engraving studio employing some of the finest topographical engravers of his day,  Le Rouge, Nee, Dequevauviller, Reville to name but a few and then coordinated with learned men such as Le Chevalier, Lacretelle, Choiseul-Gouffier, Barbie de Bocage amongst others to complete the text. By 1819 all 12 issues with a total of 48 plates and 3 maps were published

Melling’s publication was wildly successful; his exhibition of the original paintings at the Louvre earned him the Gold Medal and led to his appointment as landscape painter to the Empress Josephine. His appointment continued under the Restoration of Louis XVIII, who named him a Knight of the Legion of Honour following the publication of his Voyage Pittoresque dans les Pyrenees Francaises shortly before his death.

However, it is for the work on his beloved Constantinople that Melling is best remembered. Regarded in both the West and the East as one of the grandest and most beautiful works of the city, it can be said that Melling saw the city as an Ottoman but painted it as a European, expressing a lovely balance of adoration and artistic skill that renders this work without rival.

Below are a few examples from this collection. Please click on an image to see it in high-resolution with details of the work itself. For the full list of original antique Melling engravings available,  please do contact us.

Constantinople: Panorama from Boulgourlou Hill above Scutari on the Anatolian shore of the Bosphorus. In the foreground is the artist conferring with locals as he sketches.

Constantinople: Hippodrome or Atmeydanı (Horse Square). View of the 2nd century square designed for entertainments and racing with the obelisks of Constantine VII and Theodosius, the latter actually being the obelisk of Thutmose III 13th c BC.

Panorama from the Sea of Marmara: Showing the coastline from the Chateau of the Seven Towers to the Escurial with galleons on approach.

Topkapı Palace: Second Court of the Sergalio. View showing the accompaniment of courtiers to the cortege of a European Embassy in audience with the Sultan, looking towards the Gate of Felicity which leads to the Third, or Inner, court. 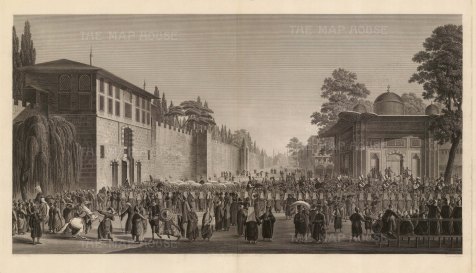 Festival of Bairam (Eid): The solemn march of the Sultan’s retinue attended by courtiers, Europeans and residents of the city. 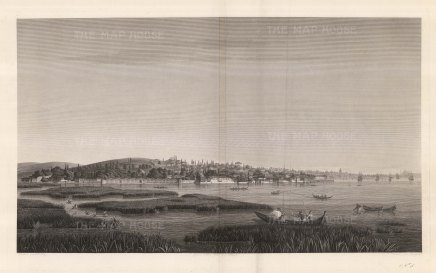 Kara-Aghatch: Wildfowling on the Fresh Waters Canal, an estuary of the Golden Horn northeast to the city between Kara-Aghatch and Bahari- Keui.

Islands of the Princes (Kızıl Adalar): Panorama of archipelago of nine islands in the Sea of Marmara off the coast. The islands served as an exile for royals for both the Byzantine and Ottoman Empires.

Tenedos (Bozcaada): Showing the island’s15th c.castle and SW entrance to the Hellespont (Dardenelles), the narrow passage between the Aegean Sea and Sea of Marmara. The Western party in the fore may be a reference to the Russo-Turkish War (1787-92) in which the Ottomans were supported by the French and British.

Tophana: Panorama of the artillery arsenal and canon foundry destroyed by fire in 1823.

Topkapi Palace: Premier Court de Serail (Court of Janissaries). Looking towards Bab-us Selam (Salutation Gate), through which only the Sultan can enter mounted. The Armoury (Hagia Irene) and the Mint to the right.

Aqueduct of the Emperor Justinian: The 4th century Valens or Grey Falcon Aqueduct was restored by Justinian II in the 6th century.

Dardanelles: Panoramic view of the Straits connecting the Mediterranean with the Sea of Marmara, with the coasts of the peninsulas of Gallipoli and Troas.

Kadi-Kieui: Village in the place of ancient Chalcedon on the Propontis Sea south of Oskudar. 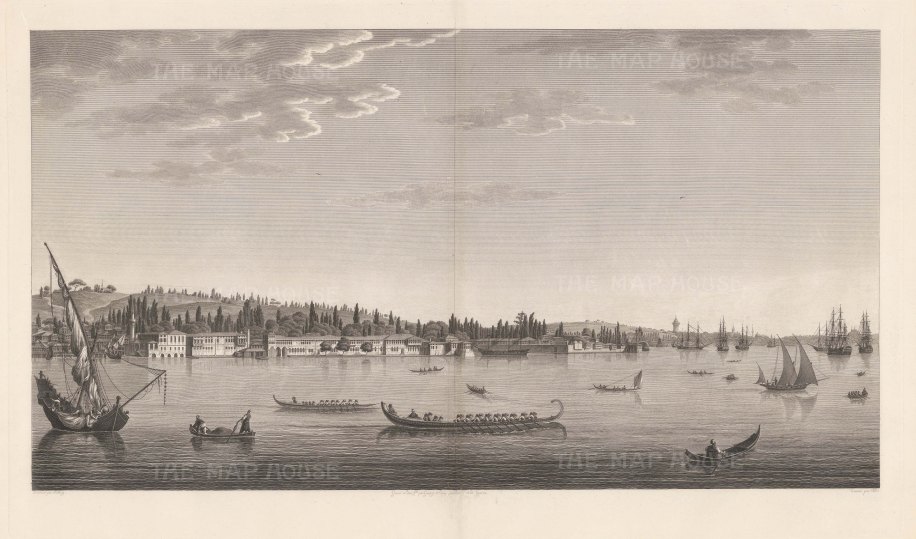 Aïnali-Kavak: View near the Arsenal in the interior of the port on the north-eastern coast. Artist and architect to the Ottoman court, Melling later became a favourite of the Empress Josephine of France.