To see our specialist collection of Lt. Joseph Moore, please click the link below.

This page represents only a small part of our collection of original Antique prints of Burma. Please click on an image to see it in high-resolution, with details of the work itself.  For enquiries and purchases, please do contact us.

Rangoon: Great Dagon Pagoda as seen from the principal approach with the Bombay Marine in marching formation.

Lady and gentleman of the Kayn tribe in traditional dress.

Rangoon (Yangon): Shwedagon Paya and Bell. Showing a substitute for the world’s heaviest bell, cast in 1484 and sunk in the Yangon during its theft by Portuguese mercenaries in 1608. 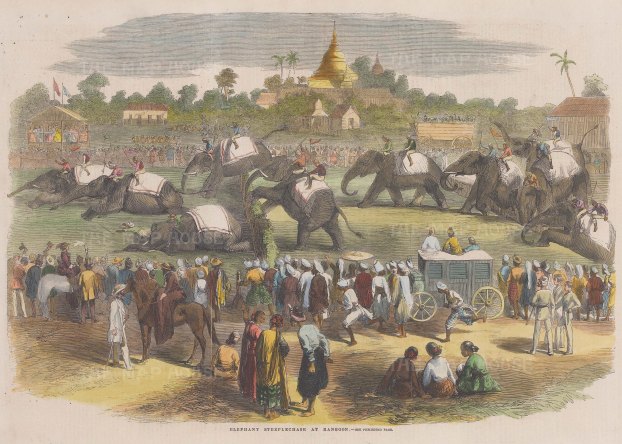 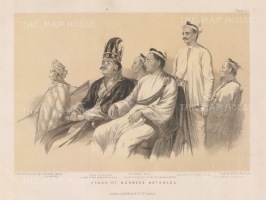 Portraits of the notables of Amarapura.

Panorama at the Western Gate. 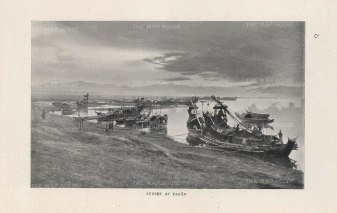 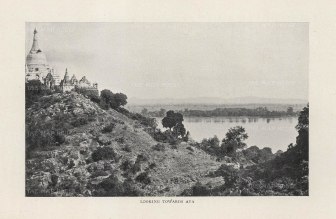 Ava: Panoramic view from the temple. 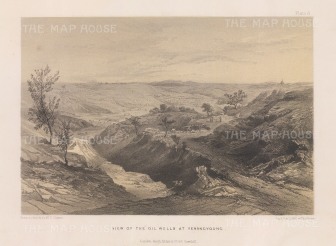 Yenangyoung on the Irrawaddy (Ayearwady): View of the Oil wells. 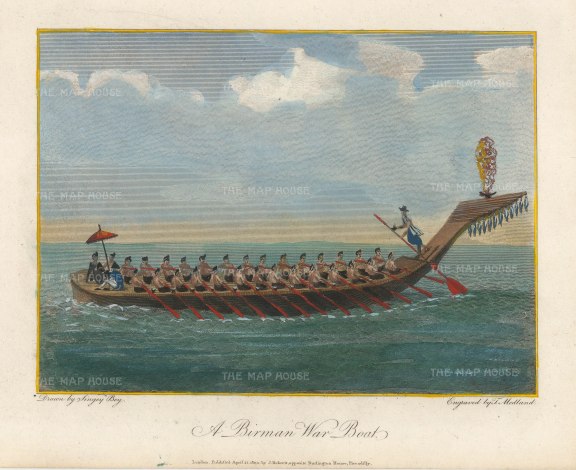 Burmese War Boat: Large villages were required to provide at least one war-boat with rowers to be ready for deployment on behalf of the crown.

Irawadi Valley at its confluence with Myit-Nge, about 650 miles from the sea.

Kemmindine near Rangoon: The British Army storming the lesser stockade.

Sagaing: Forshore at Sagaing with boats.

Rangoon (Yangon): Looking South from the Eastern Road towards the Rangoon River.

The British Army in formation with the earliest depiction of a Congreve Rocket, developed By Sir William Congreve in 1804.

The Lord White Elephant of King Tharrawaddy Min at Amarapura.

Kioum: An example of a Burmese Buddhist temple and monastery. 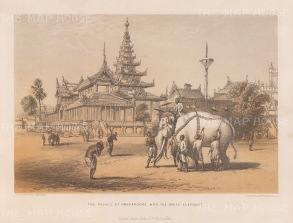 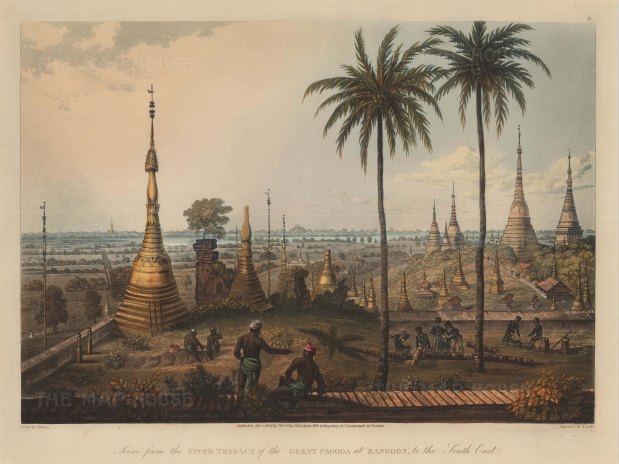 Shwedagon Paya, Rangoon (Yangon): View from the upper terrace towards the South East with British soldiers felling trees in the foreground. 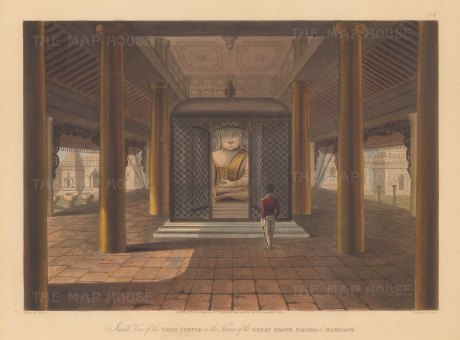 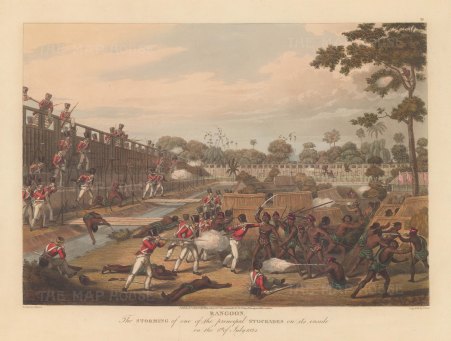 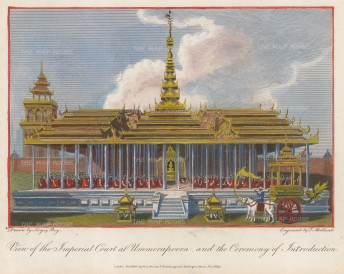 Ummerapoora (Amarapura): View of the Imperial court at the new capital of King Bodawpaya. 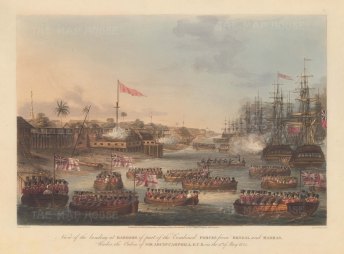 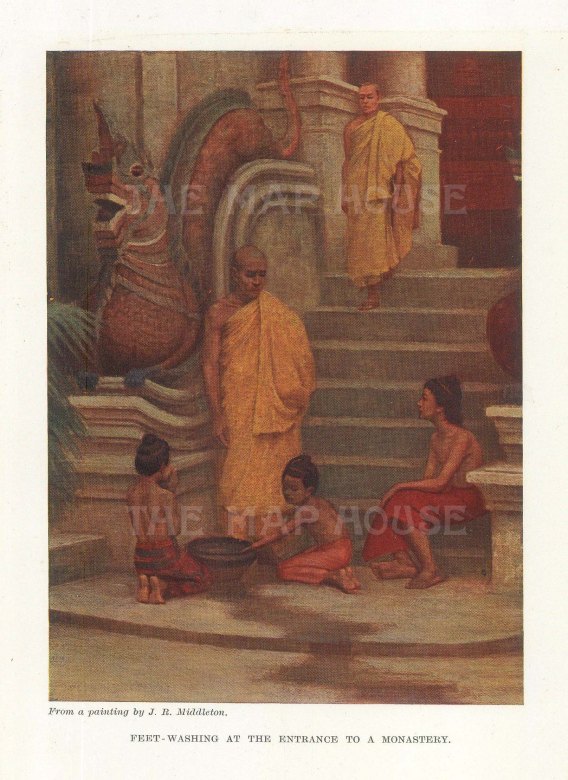 Feet washing at an entrance to a monastery. After James Raeburn Middleton.

Bagan: View of a part of Sembyokoo Temple.

Dalla on the Rangoon (Yangon River): Burning plain of Dalla with the British Fleet in the harbour including HMS Diana, the first steam-powered warship of the East India Company newly armed with Congreve rockets

Rangoon (Yangon): Shewdagon Paya. Looking North from the terrace, with the artist sketching in the foreground.

Mandalay: Busy scene of the main street with the King’s Bazaar.

Amarapura: View of the Royal Monastary, later moved to Mandalay and called Shwenandaw. 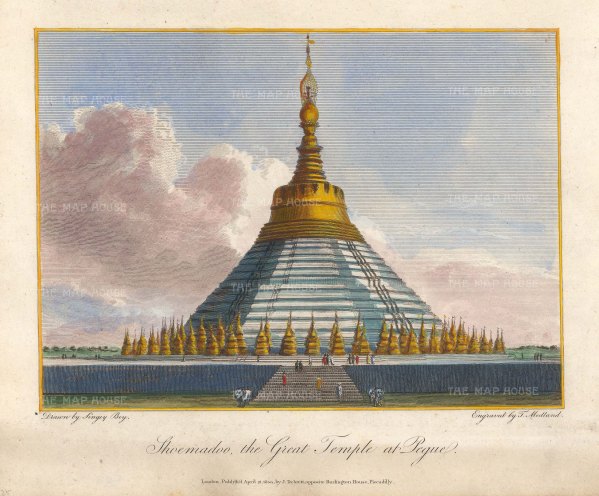 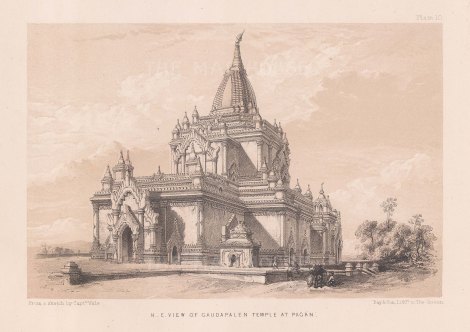 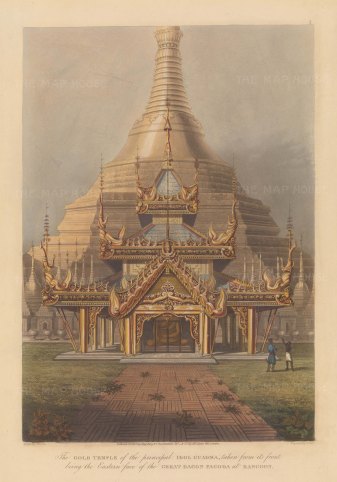 Member of the chief council and his wife in ceremonial dress.

Waiting for the steamer on the banks of the Irrawaddy. After James Raeburn Middleton.