To see our specialist collection of David Roberts prints including the Holyland, please click the link below.
David Roberts

This page represents only a small part of our collection of original Antique prints of the Holyland. Please click on an image to see it in high-resolution, with details of the work itself.  For enquiries and purchases, please do contact us.

Temple Mount: The Western Wall and Dome of the Rock.

Cana from the hillside. 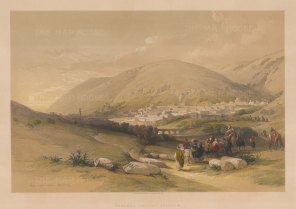 Nablous, Ancient Shechem: Panorama of the city with evening camel train and ruins in foreground. 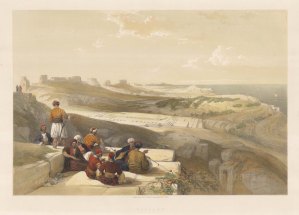 View over Askalon and the Sea of Tiberias.

Wady Mokatteb, Gebel el Mokatteb or Written Mountains. View from the south east with a caravan on the approach. The famous inscriptions were variously attributed as Hamyaric and Chaldean.

View of the river and its banks.

Bethlehem: Panoramic view of the town and the Church of the Nativity.

View of the entrance to the valley. 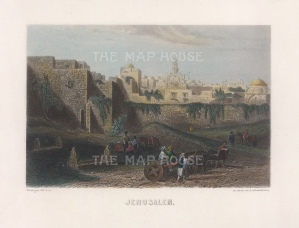 View of Old Jerusalem from the walls.

Wady Sabra Arena south of Petra: View of the Nabataean ruins at the foot of Jabel El-Yathum and above the riverbed of Wady El- Yathum.

Petra: The Ravine. The ancient capital of the Nabatean Kingdom built by the 4th century BC was rediscovered by the West in 1812.

Jaffa: View of the old city.

Petra: El- Deir or The Monastery. Built in a reinterpertation of the Corinthian order, the monastery was a temple and dining hall. 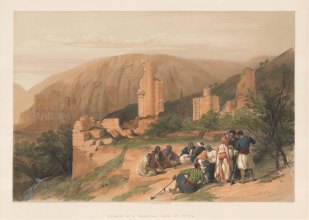 Petra: Remains of the Triumphal Arch erected to the Emperor Hadrian (76-138 AD).

Panorama of Jerusalem and its environs from the Mount of Olives. 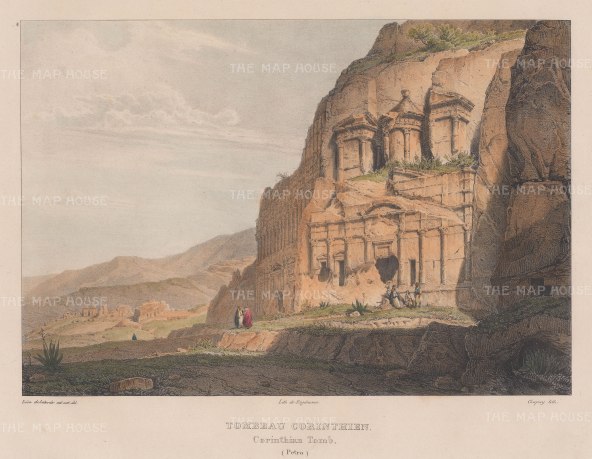 View of a Corinthian tomb. One of the four Royal Tombs replicating Nero’s Domus Aurea at Rome.

Panoramic view of the valley. 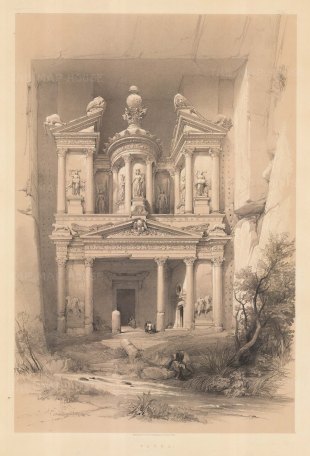 Petra: Al Khazneh, the treasury. View of the entrance to Nabatean mausoleum. 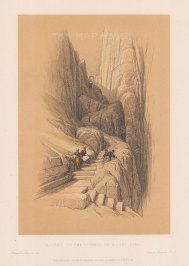 Ascent to the Summit.

Rama (Ramallah): Panorama of the city near to Jerusalem

St. Jean D’Acre. Panorama of city with Mount Carmel in the distance.

Pillar of Absalom in the Kidron valley near Jerusalem.

Aqaba Fortress on the Red Sea: View of the 16th century fortress with caravans on the approach.

Tomb of the Kings: View of the entrance.

Desert scene with the Encampment of the Allooeen. 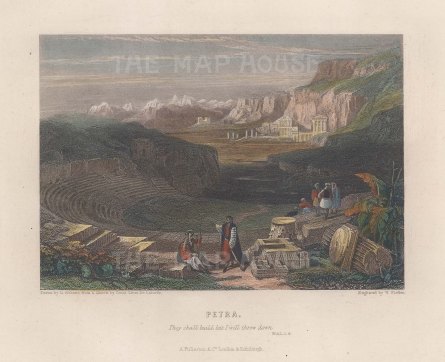 View from the amphitheatre to the Treasury.

Panoramic view of Jerusalem from outside the walls.

Jerusalem: Panoramic view with five views of tombs and sepulchres, and explanatory text in French.

Holy Sepulchre Church: View of the Church of the Resurrection at Calvary (Golgotha) with five views of the interior. 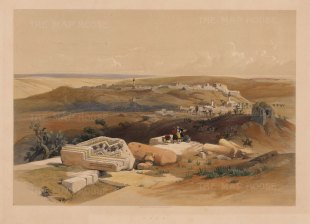 Bethlehem: Panorama of the city with three small views including Nazareth. Explanatory text in French. 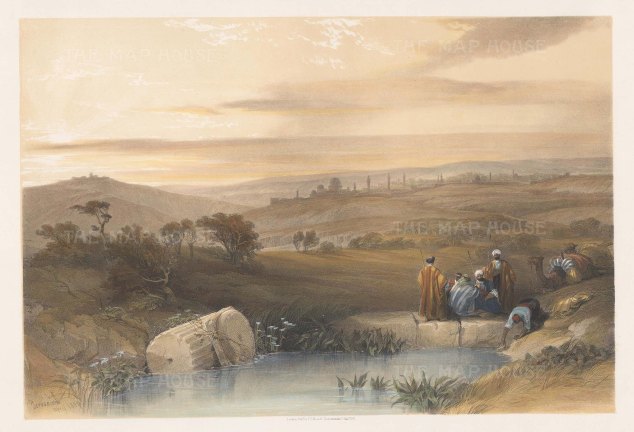 Extensive view of the City and the Valley of Jehoshapat from between Scopas and the Mount of Olives.

Facade of the El-Deir or Monastery.

View of Jerusalem from the Mount of Olives. After William Turner, RA.

Panorama from the South.

Two tombs detached from the rock.

Petra: View from the North East of the four Royal Tombs: The Urn, The Silk, The Corinthian and The Palace.

Jordan: Ouadi Mousa. View of a deserted column with camels and people in the foreground. 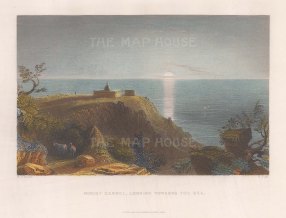 Looking towards the sea. 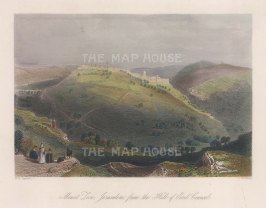 Bird’s eye view from Gethsemen of the Old City: Based on the 1660 view by Wenceslaus Hollar, after the drawings of the Jesuit Juan Battista Villalpando.

General view of the city.

Jordan Valley: Descent upon the valley of the Jordan. 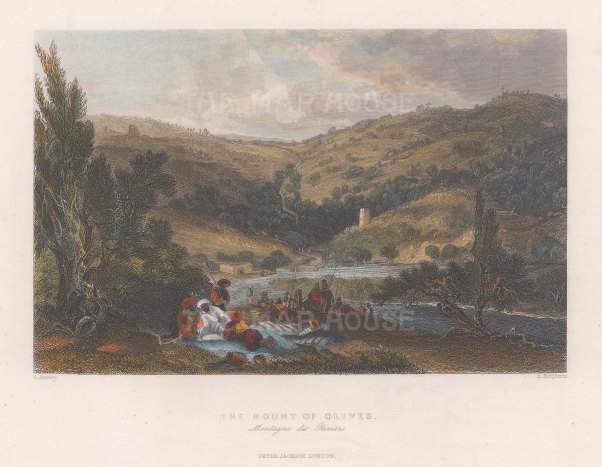 View of the site of ancient Bethany (Al-Eizariya).

Panorama of the City looking from the Mount of Olives to the Mosque of Omar. 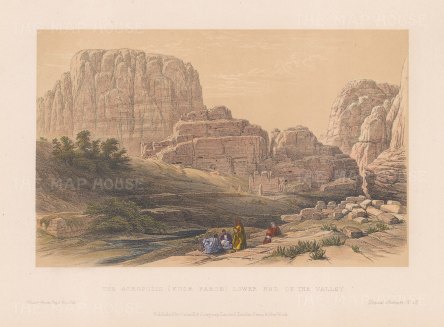 View of the Acropolis, Ksr Faron. Lower End of the Valley. 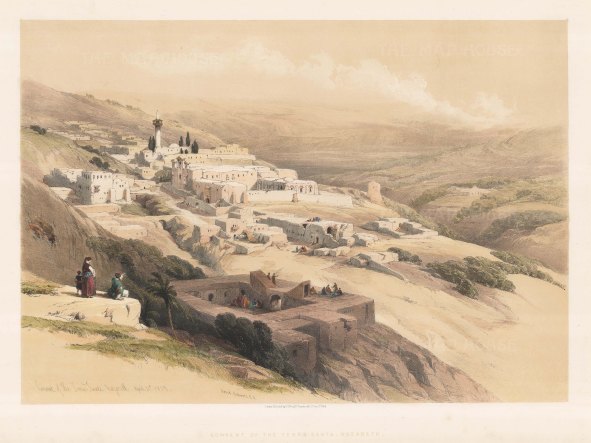 Solomon’s Temple: View of the Court of the Priests during preparations for offering sacrifices.

Valley of Jehosaphat with the City in the distance. 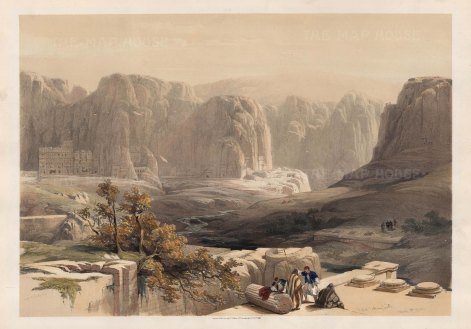 Petra: Looking south toward the main site on Jebel al-Madhbah.

Mount Sinai: Convent of St.Catherine, looking towards the ruin of the encampment. 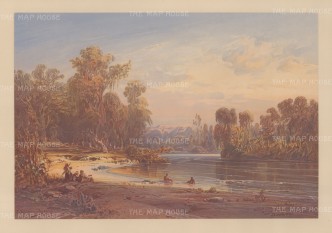 Pilgerbad, Jordan. Pilgrims resting on the banks of the River Jordan. 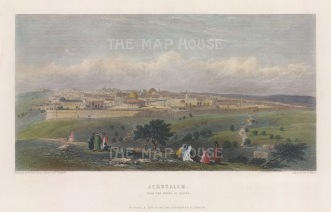 Panorama from the Mount of Olives. 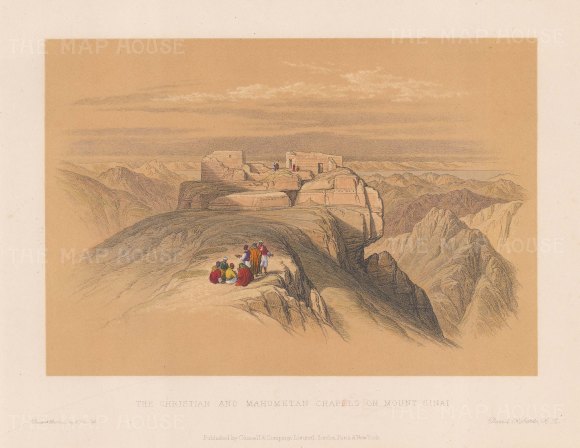 The Christian and Mahometan Chapels.

Ramla, Ancient Arimathea: Panorama of the 15th century Hospice of St. Nicodemus and St. Joseph of Arimathea with the 8th century White Mosque tower in the foreground. 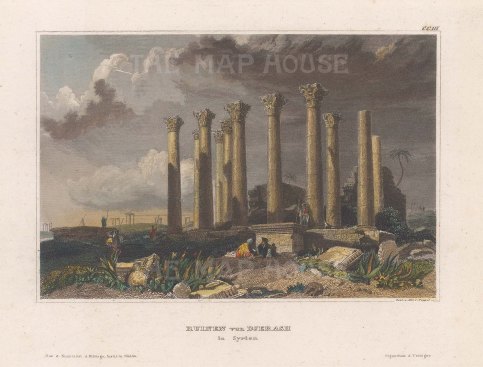 View of the ruins of Jerash. 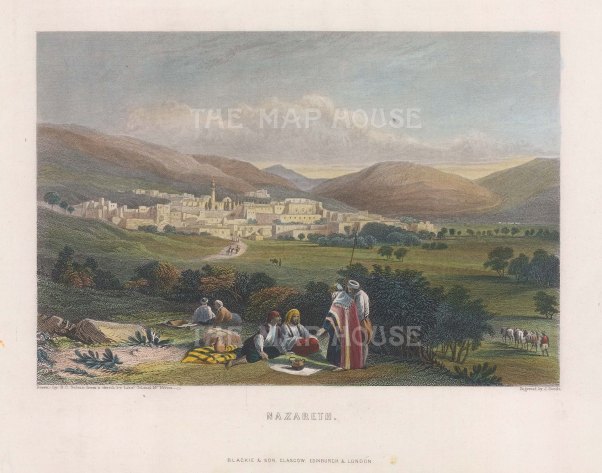 Panoramic view from the environs.

Jerusalem from the Mount of Olives.

A General View of the City of Jerusalem from between The Mount of Olives and Mount Scopus. Details of landmarks in borders of view. 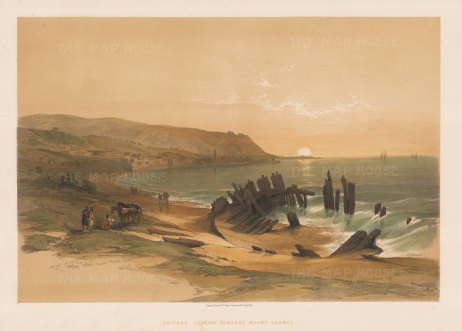 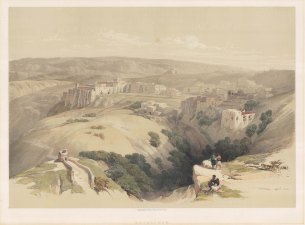 Bethlehem from the hills. Sacked by the Emperor Hadrian in the 2nd Century, the city was largely rebuilt in the 4th century. 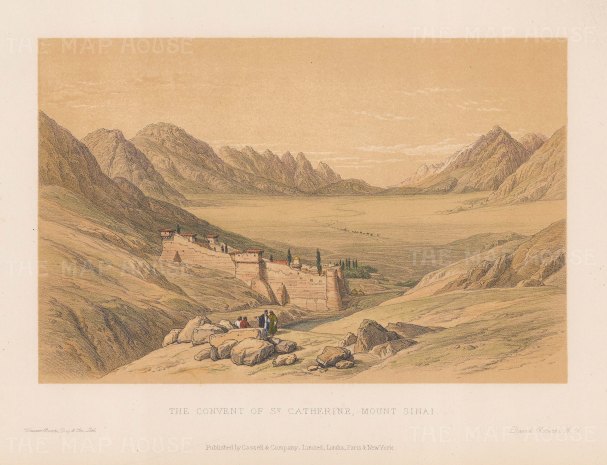 El Bourg Monastary near to El Tor or Raithu on the Red Sea.

Panoramic view of Jerusalem from the Mount of Olives. Six views surround the main image; The Triumphal Arch, Tadmor; Rachel’s Tomb; The English Church at Jerusalem; Facade of the Tomb of the Virgin; Damascus; The Temple of Jupiter, Baalbec. 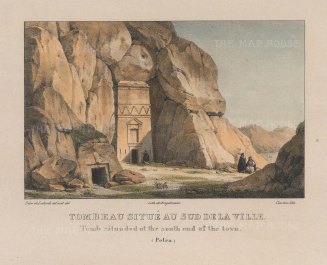 Entrance to a tomb at the southern end. 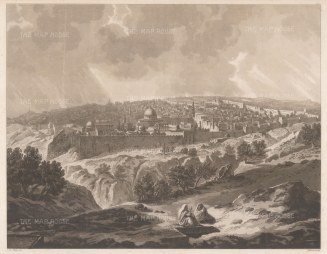 RARE: Panorama from the valley of Josaphat. de Forbin, curator of the Louvre, arrived in the Levant with an expedition of artists to purchase antiquities. 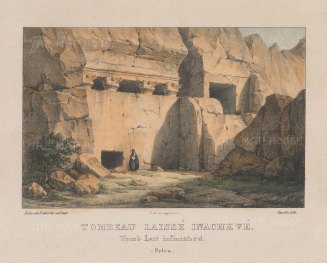 Entrance to an unfinished tomb.

Petra: View of the entrance to a Nabataean tomb with a Greek inscription.

Panoramic view from the environs. 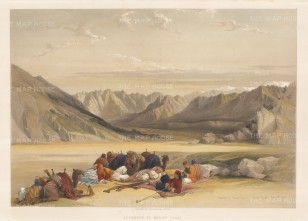 Panorama of Jerusalem from the Mount of Olives.

Petra: View of the theatre. Built during the reign of King Aretus of the Nabataens in 9BC-40 AD. 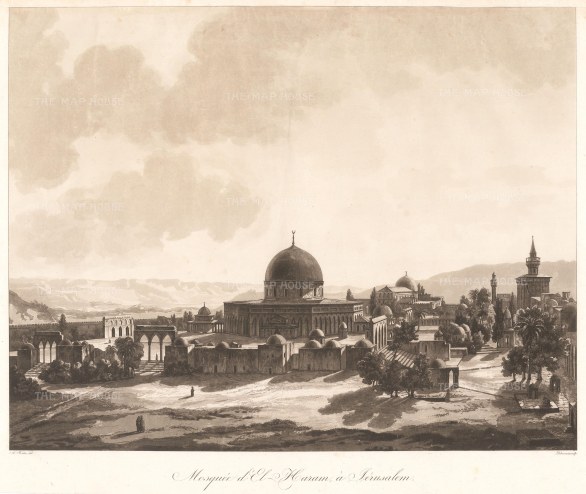 RARE: Mosque of El-Haram. In 1817 de Forbin, curator of the Louvre, arrived in the Levant with an expedition of artists to purchase antiquities.