To see our specialist collection of Antoine-Ignace Melling, please click the link below.

This page represents only a small part of our collection of original Antique prints of Turkey. Please click on an image to see it in high-resolution, with details of the work itself.  For enquiries and purchases, please do contact us.

Constantinople: Hippodrome (Atmeidan). With the Column of Theodosius and Agia Sophia. 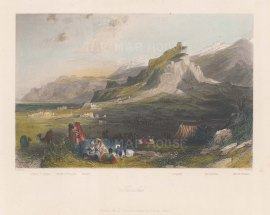 Capital of the ancient kingdom of Lydia. With key to sites.

Castle of Europe and Castle of Asia (Rumelihisarı and Anadoluhisarı).

Yoros Castle, also known as the Genoese Castle as Genoa occupied it throughout the 15th century. After Jules Laurens.

Constantinople: Panoramic view from Pera looking over the Imperial Arsenal and the Golden Horn towards St Sophia.

View of the city and limestone cliffs on the Euphrates.

Sketches illustrating architectural details from the Mosque of Diyarbakır.

Adrianople: View at the entrance to the city.

Aïnali-Kavak: View near the Arsenal in the interior of the port on the north-eastern coast. Artist and architect to the Ottoman court, Melling later became a favourite of the Empress Josephine of France.

Tenedos: Panoramic view of the fortress and harbour on the Aegean Sea.

Topkapı Palace: Second Court of the Sergalio. View showing the accompaniment of courtiers to the cortege of a European Embassy in audience with the Sultan, looking towards the Gate of Felicity which leads to the Third, or Inner, court.

Constantinople: View of over the city including the Topkapı Palace from the summit of Galata. 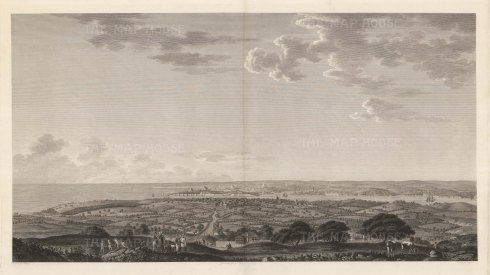 Constantinople: Panorama from Boulgourlou Hill above Scutari on the Anatolian shore of the Bosphorus. In the foreground is the artist conferring with locals as he sketches. 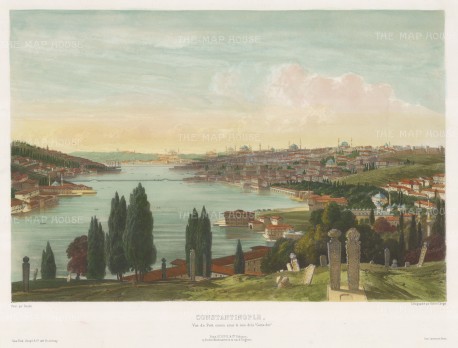 Constantinople: View from the Eyup cemetery, looking from the heights towards the Golden Horn (Halic). After Alexandre Raulin. 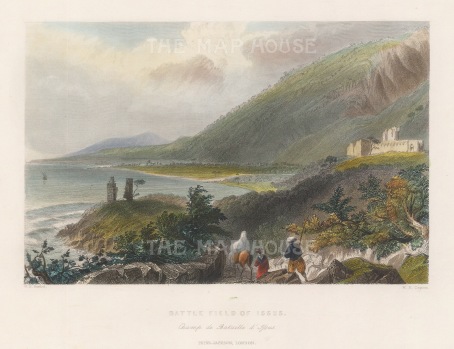 View of the city looking West from the British Consulate during the Russo-Turkish war.

Constantinople: Hippodrome or Atmeydanı (Horse Square). View of the 2nd century square designed for entertainments and racing with the obelisks of Constantine VII and Theodosius, the latter actually being the obelisk of Thutmose III 13th c BC. 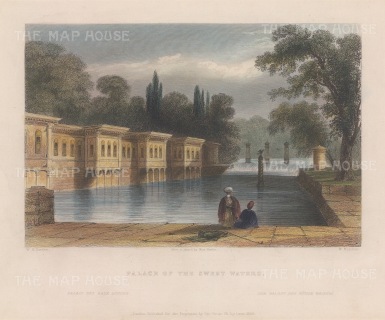 Constantinople: Palace of the Sweet Waters. 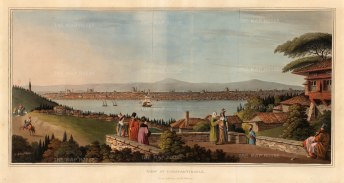 Constantinople: View of the city from across the Bosphorus. 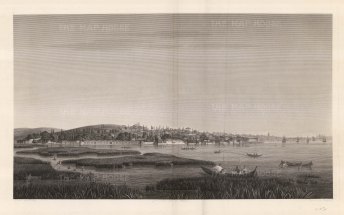 Kara-Aghatch: Wildfowling on the Fresh Waters Canal, an estuary of the Golden Horn northeast to the city between Kara-Aghatch and Bahari- Keui. 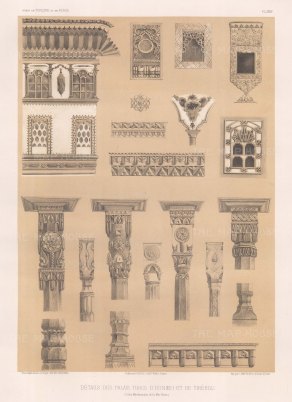 Pompeiopolis: View of ruins in the Roman city-state of ancient Paphlagonia.

Temple of Mars. View of the ruins with the town in the background.

Aqueduct of the Emperor Justinian: The 4th century Valens or Grey Falcon Aqueduct was restored by Justinian II in the 6th century.

Lively scene of a caravan and encampment. 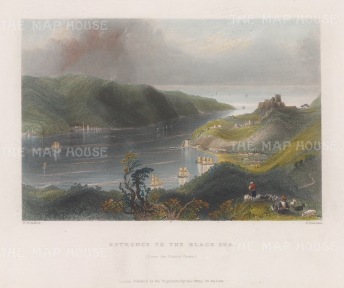 View of the entrance to the Black Sea from Giant’s Mount. 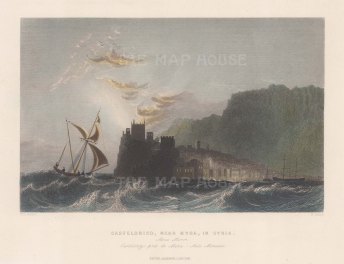 Constantinople: St Sophia: View of the Square and fountain built by Sultan Mahmud in 1740. With key to buildings. 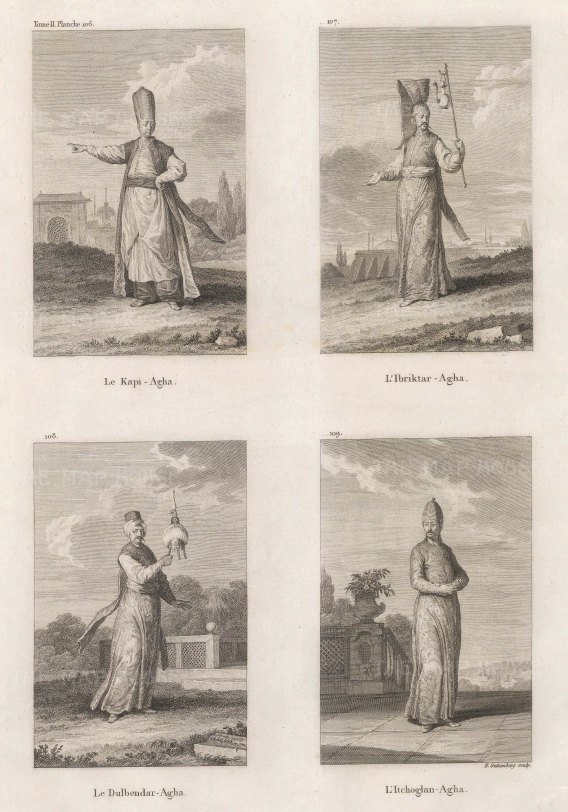 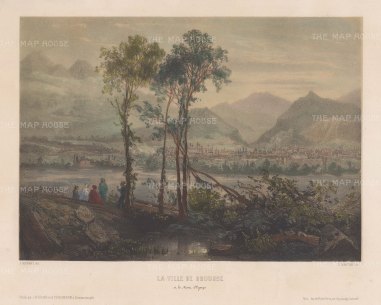 Brousse: View of the town with Mount Uludag and the Mysian Olympus Range in the background. 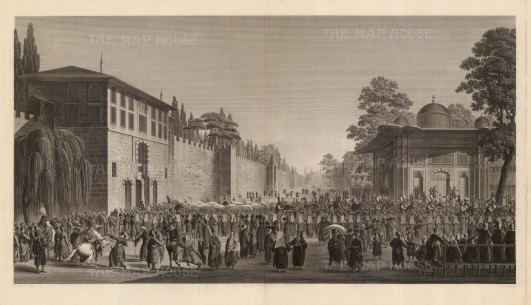 Festival of Bairam (Eid): The solemn march of the Sultan’s retinue attended by courtiers, Europeans and residents of the city.

Constantinople: Panorama from Scutari (Uskudar) across the Bosphorus to theTopkapi Palace.

Ephesus: Temple of Artemis. With the fortress of Selcuk on Ayasoluk Hill in the distance. 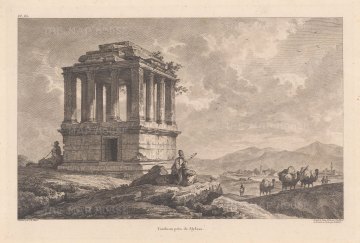 View of Gumuskesen, a Roman tomb dating from the 2nd century AD.

Islands of the Princes (Kızıl Adalar): Panorama of archipelago of nine islands in the Sea of Marmara off the coast. The islands served as an exile for royals for both the Byzantine and Ottoman Empires.

Constantinople: Mosque of Suleyman the Magnificent. View of the complex designed by Mimar Sinan with a plan of the gardens. 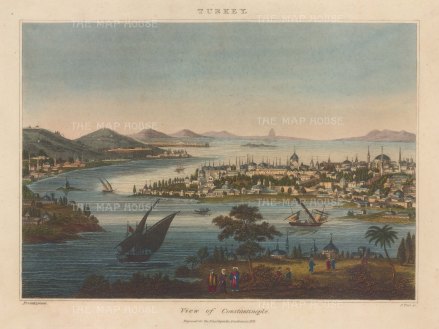 Kars: View of the town and Citadel after the defeat of the Ottoman forces during the Russo-Turkish war.

Constantinople: Distant view of the city from the road to Belgrade.

View of the town on the southern coast of the Black Sea. After Jules Laurens.

View of the entrance to the Aegean.

Officers of the Court: A Reis (Captain of the Vessel), a Galioundji (sailor), Achdji Bachi ( Chef) and a Janissary (Bodyguard).

Constantinople: Double panorama of the city and the Golden Horn, looking towards Pera and from Pera. With keys. The Conference of 1876 saw Britain and European countries address political reforms in Ottoman territories.

Smyrna: Panoramic view with key and text in French. Details of principal buildings and history of the settlement dating to at least 3000 BC. 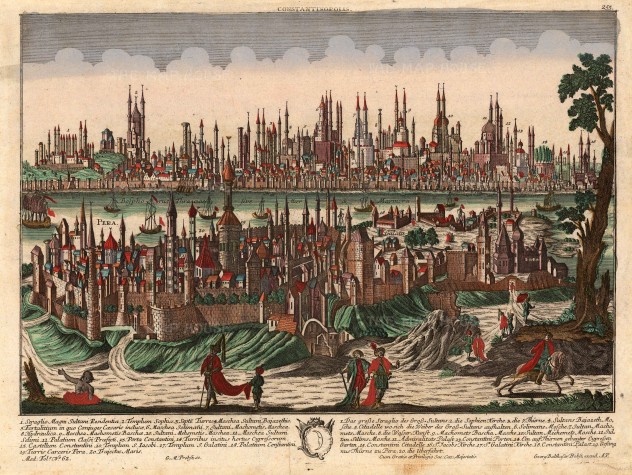 Architectural sketches illustrating one of the Gates of Diyarbakır. 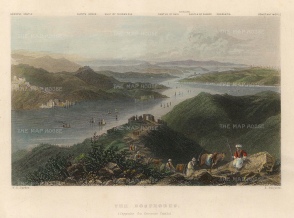 Bosphorus: Panoramic view from the Castle of Genoa to Constantinople. With key. 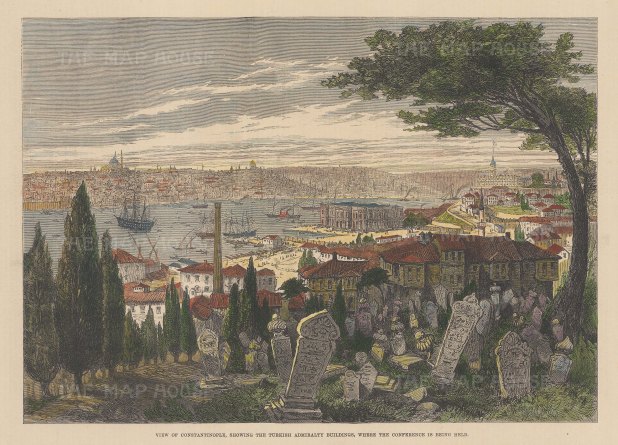 Constantinople: View of the city showing the Admiralty Buildings from over the graveyard.

View over the straits towards Yoros Castle (Genoese Castle) and the Exinus (Black Sea). 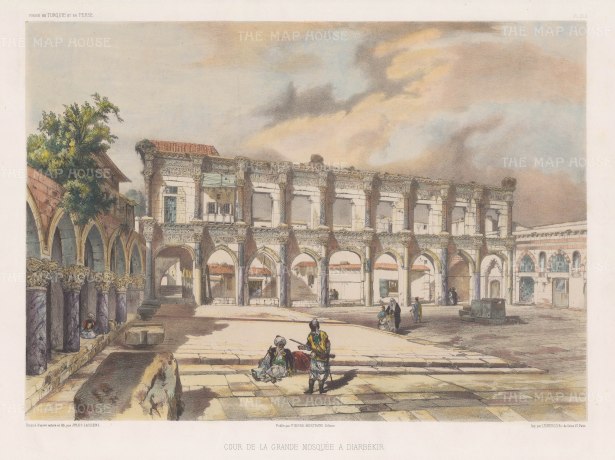 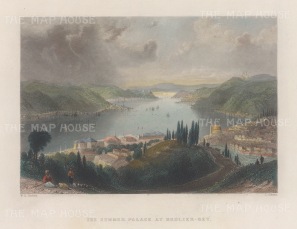 Panorama from the Sea of Marmara: Showing the coastline from the Chateau of the Seven Towers to the Escurial with galleons on approach. 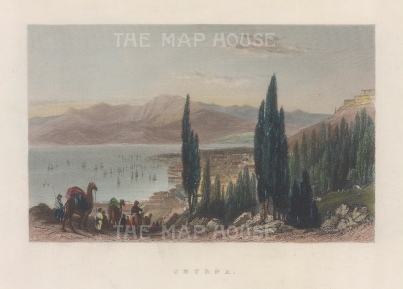 Smyrna: Panoramic view over the port from the environs.

Constantinople: Panorama from Galata to Scutari and Constantinople. Issued in the year the Treaty of Pruth ended the Russo-Turkish war; Le Blond was later appointed as chief architect of the city of St Petersburg. 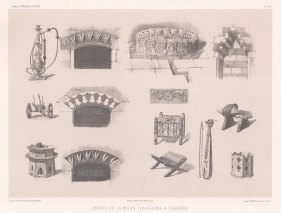 Several sketches showing the implements and architecture of a house in Diyarbakır.

Castle of Europe and Castle of Asia (Rumelihisarı and Anadoluhisarı). Entrance to the Black Sea.

Caravan resting on the outskirts of the town on the route to Mugla.

Magnesia ad Sipylum (Manisa): View from beyond the city walls towards the city and Mount Spil (Sipylus). 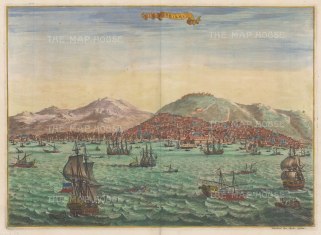 Smyrna: Panorama of the port and city from the Aegean. 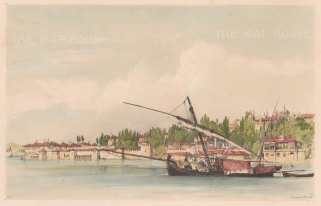 Constantinople: Sea of Marmora: View from the Seraskier’s Tower.

View of the entrance to the Aegean. 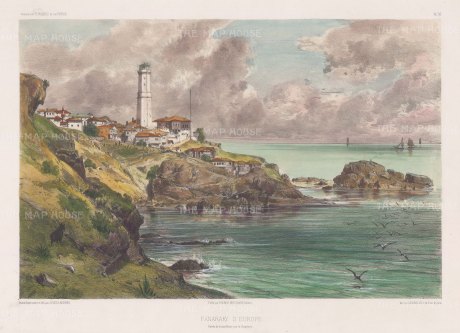 Fanarki Point: Entrance to the Black Sea from the Bosphorus. After Jules Laurens. 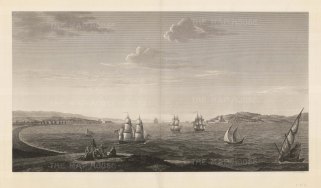 Dardanelles: Panoramic view of the Straits connecting the Mediterranean with the Sea of Marmara, with the coasts of the peninsulas of Gallipoli and Troas.

Constantinople: Mosque of Sultana Valida from the port. 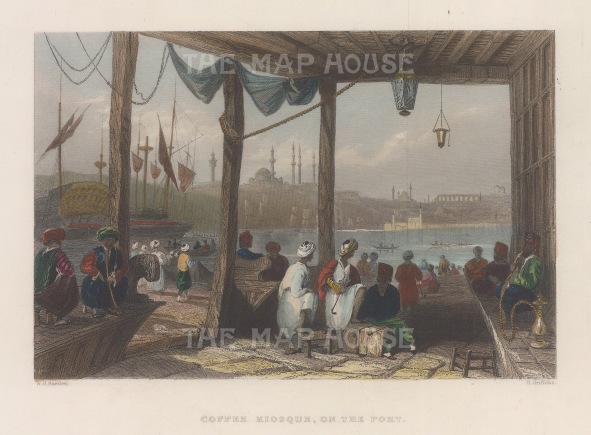 Constantinople: Coffee Kiosk: Looking into the port towards St Sophia.

RARE Constantinople: Aerial plan of the Bosphorus Straits as seen during the Great Turkish War, a period in the late 17th century of continuous warfare between the Ottoman Empire and various European powers. 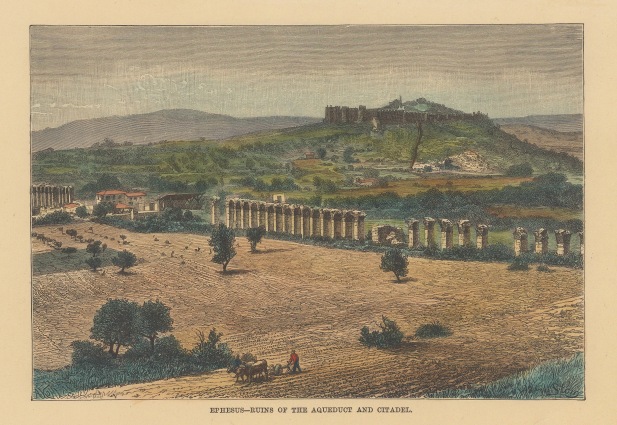 Ruins of the 2nd-century Corinthian order Temple of Zeus Lepsynus.

Panoramic view from the Dardanelles.

Smyrna: Karatas Cove. View of the boroughs of Karatas and Gioztepe.

Constantinople: Dolmabahçe Palace. Bird’s-eye view from the hills over the palace and Sea of Marmara.

Diyarbakır: View of the city walls from the environs. After Jules Laurens.

RARE Constantinople: Panorama with key and allegorical baroque border: The city’s Ottoman name is deliberately ignored in reference to its Christian heritage, even as Europeans and particularly the French are intensifying commerce and developing ties with the Empire.

Panoramic view of Constantinople: View looking along the Golden Horn.

Constantinople: Panorama from the Tower of Galata.

Sestos: View of the city and fort at the narrowest part of the Hellespont on the Gallipoli peninsula.

Constantinople: Hippodrome (Atmeidan), the social centre of Constantinople during the Byzantine era, the circus fell into disuse after the fall to the Ottomans in 1453. The Obelisks are one of the few surviving features.

Kadi-Kieui: Village in the place of ancient Chalcedon on the Propontis Sea south of Oskudar.

View over Constantinople from Mount Bulgurlhu.

Constantinople: View from the heights above Eyub.

View from the great burial ground at Pera.

Tophana: Panorama of the artillery arsenal and canon foundry destroyed by fire in 1823.

Tenedos (Bozcaada): Showing the island’s15th c.castle and SW entrance to the Hellespont (Dardenelles), the narrow passage between the Aegean Sea and Sea of Marmara. The Western party in the fore may be a reference to the Russo-Turkish War (1787-92) in which the Ottomans were supported by the French and British. 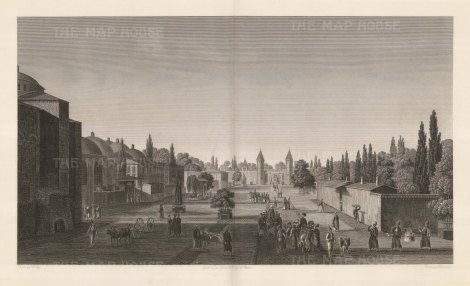 Topkapi Palace: Premier Court de Serail (Court of Janissaries). Looking towards Bab-us Selam (Salutation Gate), through which only the Sultan can enter mounted. The Armoury (Hagia Irene) and the Mint to the right. 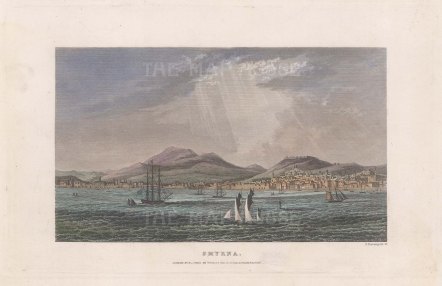 Smyrna: View from the Aegean Sea.

Sattalia: Panoramic view of the ancient region of Pamphlia on the Mediterranean Sea.